Xi Jinping’s historic third term raises the prospect of greater tension between China and the West as the Communist leader tightens his grip on power.

The 69-year-old will lead the world’s most populous nation for another five years after he was confirmed as General Secretary once more at yesterday’s party congress.

He shunned the two-term limit and promoted devoted loyalists to the Politburo Standing Committee instead of proven veterans in a move signalling his absolute power, ringing alarm bells worldwide.

Eswar Prasad, China expert at Cornell University, told the Financial Times it was ‘quite a show of force’, adding: ‘I see some dark days ahead as Xi now turns to rallying the country behind his muscular foreign policy vision.’

In the conference, Xi said that the use of force was still an option in Taiwan, and he was accused this month of trying to undermine global security and economic rules by Washington. 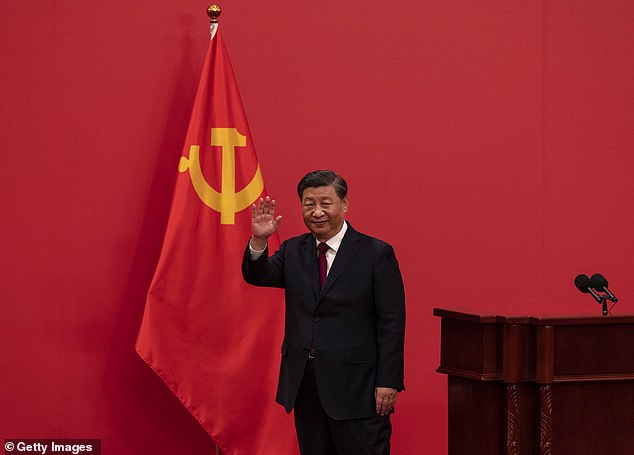 The week-long congress attended by 2,200 delegated saw changes to the party’s constitution approved and ensure Xi is China’s most important leader since Mao Zedong.

All four are Xi loyalists, and in the wider politburo, more than half of the 24 members were replaced with friends and allies.

Li was named number two in the Politburo Standing Committee, and will replace Li Keqiang as premier when he retires in March, the top economic official.

BBC’s China correspondent Stephen McDonnell told the Today Show: ‘[The standing committee] has been stacked with Xi Jinping loyalists and this would appear to show that now loyalty to Xi Jinping trumps proven ability.

‘There had been an argument that the Chinese system is one of meritocracy, it would be hard to stand that up now if you look at the people who have been given roles on that politburo standing committee. 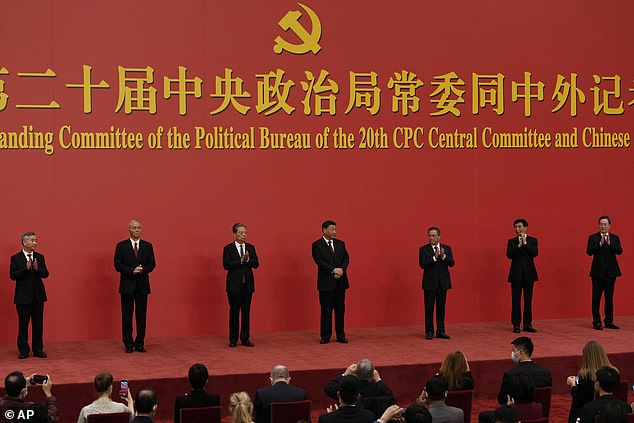 ‘Especially the new premier Li Qiang in charge of China’s economy, he was the party boss in Shanghai who was overseeing the disastrous Zero Covid lockdown there in which tens of millions of people were confined to their homes months on end, enormous food shortages, it was seen as a logistical stuff-up of a grand magnitude. He’s in charge of the Chinese economy.

‘Many analysts are looking at this and thinking it shows Xi Jinping himself doesn’t understand or even care about the economy, that loyalty to him is what is important

‘He seems to think that party discipline and rampant nationalism can fix any problem.’

Neil Thomas, senior China analyst at the Eurasia Group, said: ‘It represents a massive consolidation of Xi’s power that is unprecedented since the Mao era.’

Xi gave no sign of plans to change the severe ‘zero-COVID’ strategy that has frustrated China’s public and disrupted business and trade.

He announced no changes in policies straining relations with Washington and Asian neighbours.

Xi says ‘the world system is broken and China has answers,’ said William Callahan of the London School of Economics.

‘More and more, Xi Jinping is talking about the Chinese style as a universal model of the world order, which goes back to a Cold War kind of conflict.’

Xi’s consolidation of power has massive implications not only in China but around the world:

Xi calls for the ‘great rejuvenation of the Chinese nation’ based on reviving the ruling party’s role as an economic, social and cultural leader in a throwback to what he sees as a golden age after the 1949 revolution.

‘Xi’s embrace of Marxist-Leninist orthodoxy should put to rest any wishful thinking that Xi’s China might peacefully liberalize its politics and economy,’ Kevin Rudd, president of the Asia Society and a former Australian prime minister, wrote in Foreign Affairs. 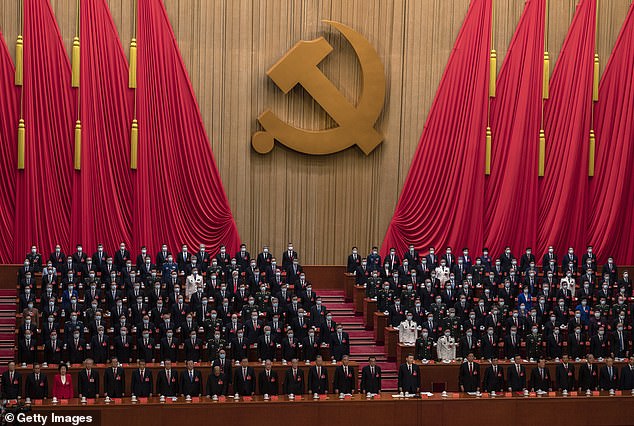 Xi calls for the ‘great rejuvenation of the Chinese nation’ based on reviving the ruling party’s role as an economic, social and cultural leader

One of President Xi Jinping’s most trusted proteges, Li Qiang is almost certain to become China’s next premier after he was unveiled as number two in the Communist Party.

The Shanghai party boss leapfrogged over two other candidates seen as having more traditional qualifications for the role — a shock move confirming that Xi has stacked the Standing Committee, the highest echelon of power, with his allies.

Li’s chances of getting such a high-ranking role were seen to have been endangered by the harsh two-month Shanghai lockdown he oversaw earlier this year, in which the financial hub’s 25 million residents struggled to access food and basic medical care.

‘Li might be quite capable, and may make a good premier, but it is hard to see how he got there other than through Xi’s personal favour.’

Although it is not unusual for former Shanghai chiefs to be promoted to the party’s top ranks, unlike almost all previous premiers, Li does not have experience at the central government level as a vice premier.

Li’s loyalty to Xi is viewed by many analysts as a way for the president to push through a conservative economic agenda.

Its ‘social credit’ initiative tracks the public and punishes infractions from fraud to littering. ‘Zero COVID,’ which tracks individuals using smartphone apps and has confined tens of millions to their homes, ‘is indicative of how Xi Jinping wants Chinese society to work,’ said Callahan.

‘It is to be under constant surveillance and control,’ he said. ‘It has become much more authoritarian and at times totalitarian.’

By 2035, the Communist Party wants economic output per person to match a ‘medium-level developed country,’ Xi said in a report to the congress.

That suggests doubling output from 2020 levels, according to Larry Hu and Yuxiao Zhang of Macquarie.

Meanwhile, however, the ruling party is building up subsidy-devouring state industry and tightening control over entrepreneurs who generate wealth and jobs.

That prompts warnings economic growth that sank to 2.2% over a year earlier in the first half of 2023 will suffer.

The economy faces challenges from tension with Washington, curbs on China’s access to Western technology, an aging population and a slump in its vast real estate industry.

‘If top leaders take the target seriously, they might have to adopt a more pro-growth policy stance,’ Hu and Zhang said in a report.

Analysts are watching for details after the party’s Central Economic Work Conference in early December.

Xi promised to ‘build China’s self-reliance and strength in science and technology.’

He gave no details, but earlier efforts to reduce reliance on the West and Japan by creating Chinese sources of renewable energy, electric car, computer and other technology have prompted complaints Beijing violates its free-trade commitments by shielding its companies from competition.

American officials worry Chinese competition might erode U.S. industrial leadership. China faces growing limits on access to Western technology, especially from the United States, which warns it might be used to make weapons.

China is building its own chip industry, but analysts say it is generations behind global leaders.

Beijing doesn’t appear to be trying to isolate China but wants to reduce strategic unease by catching up with other countries, said Alicia Garcia Herrero of Natixis.

She said that will involve increased state-led investment. ‘That is going to create some tension,’ she said.

Xi says ‘external and internal security’ are the ‘bedrock of national rejuvenation.’

In a speech that used the word security 26 times, he said Beijing will ‘work faster’ to modernize the party’s military wing, the People’s Liberation Army, and ‘enhance the military’s strategic capabilities.’

China already has the world’s second-highest military spending after the United States and is trying to extend its reach by developing ballistic missiles, submarines and other technology.

Xi refused to renounce the use of force to unite Taiwan with the mainland. 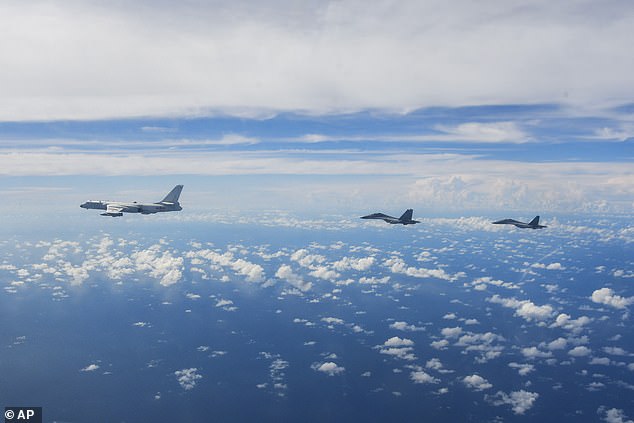 China’s former leader Hu Jintao was forcibly removed from his seat next to President Xi Jinping at the televised Communist Party Congress, before his name appeared to vanish from Chinese social media.

Hu Jintao was taken off stage shortly after foreign media came in to the Great Hall of the People, Beijing.

Search results for him on Weibo, China’s version of Twitter, have appeared to be heavily censored since his hasty removal.

Late on Saturday, state media claimed Hu was ‘not feeling well’ when he was escorted out, but was doing ‘much better’ after getting some rest.

During the incident, the 79-year-old looked slightly disorientated as two assistants came to speak to him and reluctant to move in part of the clip.

The former Chinese leader preceded President Xi and had been in power between 2003 and 2013.

He said: ‘We have resolutely waged a major struggle against separatism and interference, demonstrating our strong determination and ability to safeguard state sovereignty and territorial integrity and oppose Taiwan independence.’

The gathered delegates responded with loud applause as their president emphasized that China will ‘never commit to abandoning the use of force’ in its unification with Taiwan, which he called inevitable.

Xi added that China will accelerate the building of a world-class military and strengthen its ability to build a strategic deterrent capability.

The party also sees ‘ideological security’ as a priority, which is leading to more internet censorship.

Beijing increasingly uses its economic muscle as the biggest trading partner for all of its neighbours as leverage in politics and security.

China blocked imports of Australian wine, meat and other goods after its government called for an investigation into the origins of COVID-19.

Beijing tried unsuccessfully to persuade 10 Pacific island governments to sign a security pact this year, but is making inroads with some.

Police officers from the Solomon Islands are being trained in China. Beijing wants a ‘China-centred security system,’ said Callahan.

‘Beijing wants to be a world leader, and part of that, according to Beijing, is to be a leader in the hard politics of global security.’

This month, Chinese diplomats in Manchester, England, beat a protester after dragging him onto the grounds of their consulate.

He said the diplomatic corps will ‘improve its fighting skills and always stand at the forefront of safeguarding national interests and national dignity.’

Xi gave no indication China’s ‘zero-COVID’ strategy might ease despite public frustration with its costs.

While other countries have eased travel curbs, China is sticking to a strategy that has kept infection rates low but shut down major cities. 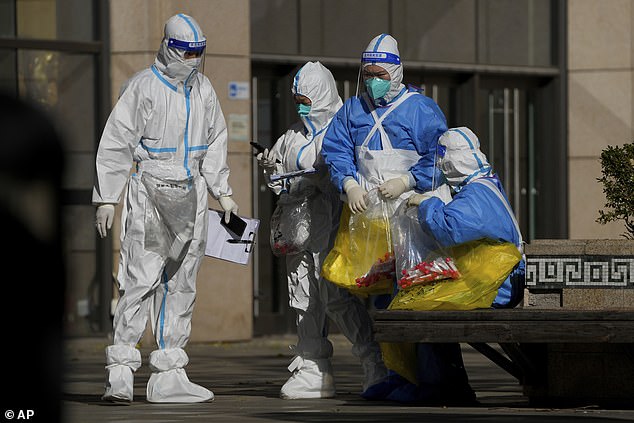 The party newspaper People’s Daily tried to dispel expectations of a relaxation once the congress ended. The strategy ‘must be sustained,’ it argued.

Public health experts say more of the elderly need to be vaccinated before the ruling party can relax the COVID-19 restrictions.

Xi promised a ‘proactive and steady’ approach to reducing climate-changing carbon emissions, but at the same time the ruling party is increasing coal production to avert a repeat of last year’s power shortages and blackouts.

China already emits more carbon than the United States and other developed economies combined, according to Rhodium Group.